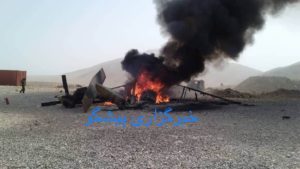 Omar Zwak, spokesman for the governor of Helmand province, said to Pishgoo News Agency: “This morning, a black Hawk helicopter belonging to the Afghan National Army held an emergency meeting in Kajaki district of Helmand province ,
as a result of which two personnel on the helicopter were injured .

Mr Zwak said, that the exact reason for the emergency meeting of this helicopter is still unknown.