One Taliban member was killed and another was arrested in a clash with Taliban militants and afghan security forces in Mirbacheh Kot district of kabul province. 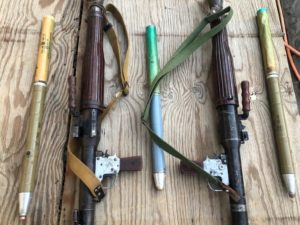 Ferdaws Faramars  spokesman for Kabul police,  said that at around 2:00 pm last night in the Mirbacheh Kot district of the Sufyan Bridge area, two terrorists attacked an armed security checkpoint and fled the scene.
the police of the Mirbacheh Kot district police headquarters pursued them and in the case of Shakerdara district, one of the terrorists,  by the name of Abubakr , was killed and  Hekmatullah are arrested by police .

According to Mr. Faramarz,  From these two terrorists, two RPG rocket launchers with 3 rounds of ammunition fell into the hands of the police.

Previous Nafiseh Hejran, the People’s Representative in the Logar Provincial Council, was targeted
Next Two gunmen were killed and detained by security forces