Nafiseh Hejran, the People’s Representative in the Logar Provincial Council, was targeted

Nafiseh Hejran, a member of Logar Provincial Council, was wounded in a shooting with her driver this morning. 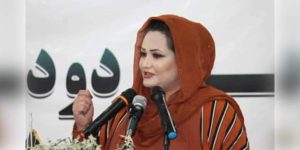 Shahpour Ahmadzai, spokesman for the Logar Police Command, Said to Pishgo News Agency:
At around 8:40 am today, Nafiseh Hejran, a member of the Logar Provincial Council and her driver, was shot and wounded by a terrorist at Pol e alam city of logar province.

according to Mr Ahmadzay, both of whom were taken by police to Logar Central Hospital for treatment .

Mr Ahmadzay also said, although Ms. Hijran’s health condition is not a cause for concern, she was transferred to Kabul for further treatment.

The assailant was detained by police at the same location, and police have launched an investigation.