Light and heavy weapons were handed over to the Diag process

Peshgo News July 5, 2020 Afghanistan, Security Comments Off on Light and heavy weapons were handed over to the Diag process 286 Views

Khalil Ahmad Jawad, the police security commander of Helmand province, told the DIAG process when handing over these weapons and ammunition: 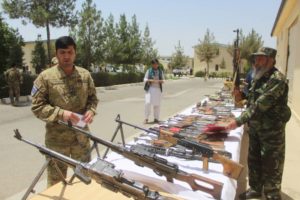 This amount of weapons and ammunition has been seized from various operations over the past year in Lashkar Gah city and its districts, during special and operative operations, and number s of people have been arrested in connection with it.