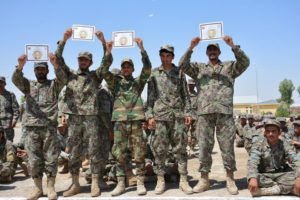 Fawad Aman, deputy spokesman for the Ministry of National Defense said, that 636 young people, including 16 women, had graduated from the Kandahar Regional Military Training Center after receiving military training.

Brigadier General  “Mirasdullah Kouhestani,” the commander of the 205th Attal Corps, said at the graduation ceremony yesterday that the youths wore national army uniforms to defend Afghanistan, and that their path was the path of truth and holiness.

After God, the eyes and hopes of our people are on these young people to serve and fight for the security of our country.