Discovery of a Taliban drone in Afghanistan + video 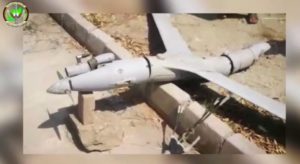 A Taliban commander who had previously been killed by security forces, members of the National Security Agency’s Special Operations Forces, carried out a series of operations in the Bati Kot district of Nangarhar province above a successful guest dipole. As a result, an unmanned aerial vehicle was discovered and seized along with an 82-meter- Havan’s weapon.

The newsletter also said that in addition to the drone, a number of other light and heavy weapons, including a 82-meter-long Havan base, had been recovered.

Two terrorists named Gholam Mohammad, son of Haji Mohammad Hassan, and Rozi Khan, son of Abdul Fattah, who were in charge of guarding the mentioned depot, were also arrested.