Peshgo News May 30, 2020 Afghanistan, Security Comments Off on 7 journalists and an employee of a private TV were martyred and wounded 295 Views

Seven media workers, including a normal person, were killed and wounded 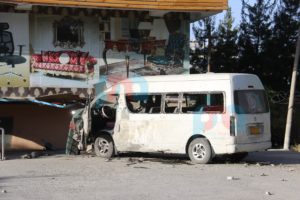 As a result of the explosion of a mine ring, which had already been deployed in the fourth security district of Kabul police, the incident took place at the crossroads of Kololeh Peshteh, Which targeted a car carrying employees of Khorshid TV and another person.

In this event a reporter and an employee of the technical department of Khorshid TV died and six others were injured.

Authorities at Khorshid TV confirmed the attack on the staff of the TV station, saying:

The car carrying the employees of this TV station has been targeted by improvised explosive devices in the crossroads of Kalaleh Peshteh and Gol-e-Sorkh. As a result, 2 martyrs and 5 other employees of this media outlet have been injured.

Mir Wahed Shah Amiri, reporter, and Shafiqullah, an employee of the technical department of this TV station, were martyred.