Peshgo News May 16, 2020 Afghanistan, Security Comments Off on Detention of a key member of the ISIS terrorist group in Afghanistan 261 Views

A key member of the ISIS terrorist group has been arrested by the National Army in Kunar province. 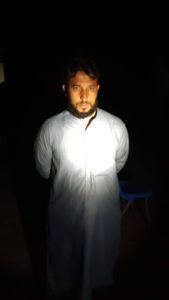 Last night, following a series of commando operations in the Suki district of Kunar province, an important member of the ISIS terrorist network’s intelligence was arrested along with a handgun.

The arrest of this key figure in the ISIS group happened that two weeks after the Afghan National Directorate of Security (NDS) announced the arrest of the leader of the terrorist group for South Asia in Afghanistan .

Meanwhile, a few days ago, following the group’s attacks on a hospital in Kabul, that nearly 40 people were martyred and wounded, most of them martyrs were women and children.

Previous Afghanistan’s health minister Infected to coronavirus
Next As result of 4 explosions in Kabul, 10 people were injured