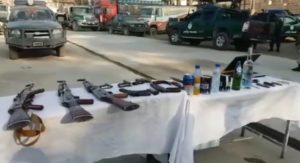 Maj. Gen. Mohammed Weiss “Samimi” Baghlan Police commander says: During a series of two operations to combat crime and with the support of 1st and 2nd District Police, nine uninsured and armed gunmen were deployed in the areas. Various towns were busy harassing people and using disruptive materials to disrupt the city’s order, with a quantity of weapons including 3 Kalashnikov 9 pistol, a knife and a quantity of alcohol obtained by the police and handed over to the police.