Breaking News
Home / Afghanistan / 30 Taliban have been killed in Kandahar.

30 Taliban have been killed in Kandahar.

Peshgo News December 25, 2019 Afghanistan, Security Comments Off on 30 Taliban have been killed in Kandahar. 361 Views 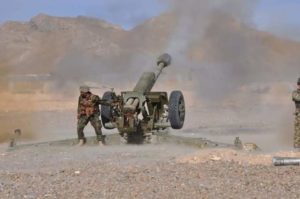 Afghan National Defense Ministry says: 24 Taliban were killed, 5 other were wounded, and two others were detained during operations of the National Security and Defense Forces in the district of Maiawand Kandahar provonce .
The operation also destroyed three vehicles, two hideouts and three terrorist positions.

Also, four other Taliban militants were killed when they were planting a car bomb and its explosian in Maiwand districts .

At the same time, two Taliban were killed, 1 motorcycle was destroyed and 2 weapons were intercepted by Afghan forces with 1 Taliban base in a clash with Taliban terrorists in Kandahar province.