The defense ministers of Afghanistan and Germany met together

Peshgo News December 3, 2019 Afghanistan, Political, Security Comments Off on The defense ministers of Afghanistan and Germany met together 320 Views 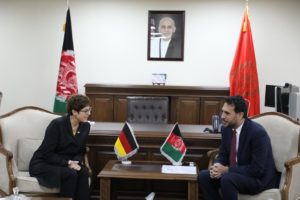 He stressed on the importance and effectiveness of Germany’s support to the ANDSF and its significant role in countering terrorism.

The German Minister of Defence expressed appreciation towards the achievements of the Afghan National Defense and Security Forces in countering terrorism.

She emphasized that Germany will continue training and consultation support to the ANDSF. 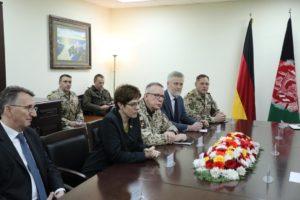 Ms. Annegret Kramp appreciated the notable and increasing presence of women in the Afghan National Army and expressed hope for this to enhance further in the ANDSF.

She also mentioned that there has been remarkable development in strengthening the Afghan Air Forces and making it more professional.

The German Minister of Defence praised the ANDSF’s efforts in defeating Daesh in the Eastern region of Afghanistan and provided assurance of Germany’s commitment to stand by the ANDSF until the defeat of all terrorists in Afghanistan.